We went to the one day CAMJAM  2 week-ends ago at Niagra Falls and had a great time. Shawn Farquar and Perfect Magic were the only dealers except for the fabulous lecturers. Romaine’s wife Joan said at the end of the day that all the years she has been going to conventions with Romaine, she never went to the lectures as she was not a magician and thought it would be boring for her. After going to the lectures of  Oscar  Munoz from Texas , Michael Dardant from New Orleans, and Vincent Hedan from France, she said “I ‘m sorry I missed the lectures all the years we’ve been going. I never realized how fascinating they were.” (or something to that nature). They had a good turn out and there was a lot of comeraderie. Then in the evening we saw Greg Frewin’s great illusion show at the Greg Frewin Theatre, a feature event in Niagra Falls.

Another event of CamJam was the presentation of the Magician of the Year Award which went to Mike Segal of Sorcerers Safari Magic & Performance Camp, which has been in operation for over 15 years. We met Mike a number of years ago, ten maybe 15, and although he is living in Toronto, his mother is from Montreal, and guess what! She was Phil’s ( yes my husband Phil) first girlfriend. He thinks he was seven at the time. So everytime Phil met Mike, he would ask how his mother was.

After we left Niagra Falls we spent  5 days with Romaine & Joan and then went to Toronto to visit my Aunt and other relatives. At the CamJam Phil told Mike he was going to Toronto on the way home and Mike said to give him a call. Phil told  him he was going to be at the Browser’s Den (a magic shop in Toronto) at noon on Saturday and we could meet there. Then Mike suggested he bring his mother and Phil thought that would be a great idea. The plot thickens!

We got to the Browser’s Den. They weren’t there yet, but I had shopping to do, after all, it is in a shopping center so I left. When I got back Jewish geography was in full swing. I met his first girlfriend, who was very sweet, and we got to talking and this is the magic connection! When one of her brothers was little he got a Magic Kit  at one of his birthday parties and his mother, Mike’s grandmother, went into another room, opened the kit, figured out the tricks and did them for the kids at the party. Phil was one of the kids and it was the first time he saw a magic trick. That was 70 years ago!

I first met Shawn many years ago. It can’t be that long ago because he isn’t that old, but it was probably in the 1990’s. We got to know him well as we had a Magic Shop in Vancouver then, across from MetroTown and Shawn lives in Vancouver. In 1993 Farquar and Felicity  (his lovely wife) performed at Magic Montreal. That was the same year Dave Williamson, Mac King and  Dick Zimmerman and other greats were there. I forget a lot of things these days, but I remember that convention well. It was a riot!

Shawn, as long as I’ve known him, was passionate about his magic and it paid off. He has transformed from a good magician to a top notch pro. He’s looks like he feels at home on T.V with the biggest stars, Penn and Teller, Ellen Degeneris, and the like.  He has won the most prestigious awards and has travelled world wide. All this takes time. But he gives of his time. He has taken the reins from Joan Caesar as President of CAM, The Canadian Associations of Magicians and is doing a great job. Since he has taken over Northern Peeks, which is a monthly magazine of CAM, it  has a new sleek look with terrific articles in it. And then of course there is a convention to run. This alone is a tremendous undertaking. I know, we did it for 19 years.

Shawn’s goal to increase the membership by at least 100 people during his 3 year term as president. Are you a member? If not, join! This is the organization that put Canada on the map as far as magic is concerned. Prior to the existence of CAM if a Canadian wanted to enter F.I.S.M. he or she had to do so under another country as there was no international magic organization  in Canada to sponsor that person. We have Joan Caesar to thank for that. She got it going. Shawn is carrying the torch. Let’s get that flame a little bigger and join up now.

Where Magic Leads Us.

It’s funny how my (abstract) pen has a mind of its own. Last week I wrote about Joan Caesar. I wasn’t going to when I started off. She was going to be mentioned of course but I was going to talk about CAM 2010 and also CAM 2009. I never got there. It was supposed to be a side story that I thought was funny so I’ll try again.

Romaine and his wife Joan usually stay with us when they come to Montreal. They used to live in Montreal but moved to Kitchener about 10 years ago. In 2009 The CAM Convention was held in Montreal so they came to Montreal and stayed with us.

Joan and I went to the gala show, but Romaine and Phil, being magicians, attended everything. The convention banquet was for Sunday lunch. Unbeknownst to Phil and I, but known to Romaine, Phil was going to be presented with the SID LORRAINE ACHIEVEMENT AWARD 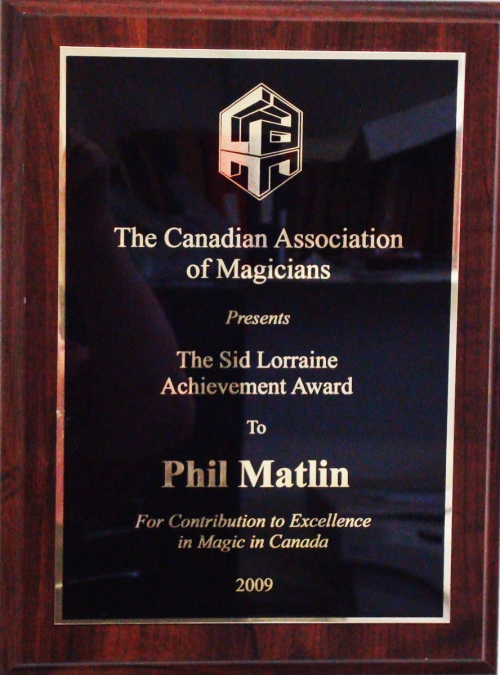 for his contribution to excellence in Magic In Canada.

Sunday morning Phil came to our breakfast table wearing a golf shirt and sport pants. He looked at Romaine who was dressed up in a white shirt and tie and jacket…the works! Phil looked at him and said, “Are you going to Church or are you going to the convention?”

“So what are you all dressed up for?”

So despite his valiant effort to shame Phil into dressing up it was to no avail.

To make matters worse, at the banquet, after the prize winners were all announced, Phil got up and went to the bathroom, totally oblivious to the fact that the emcee was now presenting him with an award. The organizers, frantic, stalled, and were going to get someone to drag him out when he reappeared.  That was 2009.

Fast foreword to 2010. The CAM Convention was in Kitchener so we stayed with Romaine and Joan.

Once again, Romaine came to breakfast dressed up. We knew that Romaine was getting a LIFETIME ACHIEVEMENT AWARD, but Romaine and Joan didn’t know, or did he find out somehow?”

“Roman, why are you all dressed up? Phil getting another award?”

“No, no, no. I have to introduce an act so I want to look presentable.”

Fast forward to the banquet. This time Joan and I went to the banquet as well. Each table had a banner of a performing magician and the attendees could sit with the magician of their choice. The four of us, along with others sat with J.C.  at the J.C. Wagner table. Romaine’s name was announced. He went to the podium to receive his award and received a thunderous applause. He told the emcee he would like to say a few words.

He thanked everyone and proceeded to say that he was sitting at the J.C. Wagner table with J.C. Wagner and that they have a lot in common. J.C. is a bar magician and he used to hang around in bars, and he kept the audience laughing until his last sentence when he spoke about the friends he made in magic and he actually broke down and wept and then the whole audience wept.

It was touching and funny. He had hoped to keep it light and comical but you just never know where you’re going to be led!

I’ve often referred to Magie Montréal Conventions in my blog, but there is a new kid on the block, the Canadian block, that is. This kid was born to Joan Caesar a number of years back. If determination had a name it would be Joan Caesar.

Joan was first introduced to magic when her son was in kindergarten and a magician wanted to do a magic show for the kids and asked her to be an assistant. She was thirty-something. That sparked her interest.

She had been somewhat into magic after that, but when we got to know her years later, maybe 1996 or 1997, she knew little about magic. I remember sitting in a restaurant with Joan and Phil. Phil was telling her stories about Frank Garcia and Al Goshman, and some of the other greats that we had come to know over the years and she hung onto every word. Joan’s son, Ben Caesar, had won the stage prize for Magie Montreal in 1995, but we didn’t know her then.

So this woman, who knew little at the time about magic decided that Canada should have a magic organization because FISM wouldn’t allow our talented magicians like Carl Cloutier, Greg Frewin and Juliana Chen to name a few, to participate because Canada had no official organization. They had to compete under the auspices of another foreign FISM representative. Although it was wonderful that they were allowed to compete at all, Joan wanted our wonderful magicians to have the opportunity to compete under our nation’s banner.

It was a long process. The organization had to have members and Canada had to be voted in by a group. Joan said that Herb Morrissey helped a great deal as he used to send out flyers and with the flyers he sent word about CAM. That brought in a lot of members. People joined from all over Canada. She told me how excited she was when someone from B.C. joined. From there it grew. It has a magazine and conventions and great conventions at that. So we tip our top hats to Joan Caesar for what she did for magic in Canada and Canadian magicians.