Magicians, Musicians and Other Street Performers In Montreal 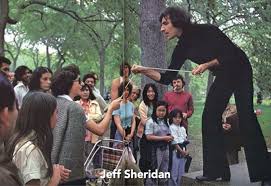 have had to deal with here in Montreal. It seems there are Draconian rules about who can perform, where and when and inspectors, etc. I would prefer that City Hall spent their precious time and manpower, not to mention our taxes, on a solution for fixing the pot holes on our streets rather than the performers on our streets.

When Phil and I were younger we traveled a lot. We drove across Canada and probably through all the states in continental U.S.A.  We took the children with us. We stopped all over to see the sights and points of interest. We also traveled to England, France, Italy and Israel. In so many places there were street performers and they added so much to our enjoyment. Many were excellent and were rewarded for their talent.  Magicians who came to Montreal, not to perform but for whatever reason, used to come in for props because it was such a vibrant city and they saw the possibilities here. They didn’t need a permit.

I don’t know if the name Jeff Sheridan means anything to you, but he was a street performer in Central Park in New York City and was the first magician to make a name for himself as a street performer and wrote a book on it. He is known as The Father of Modern Street Magic. One day he came into our shop and introduced himself. Phil knew right away who he was. He came to visit a friend and had no magic with him but his friend to him to Prince Arthur Street when it was closed to traffic and was full of restaurants and a real people attraction. He couldn’t resist doing magic there so he bought some rope and sponge balls, maybe linking rings, and I forget what else and asked us to come and see him perform. He asked if Phil would put some money in his hat at the end to get the ball rolling and he would give it back to him after.

Well, we watched his show. Tons of people came to watch him and we were pushed to the back. When the show was over we tried to get to the front but couldn’t make it. We saw him signal to us not to bother coming. People were fighting to get to him to throw money in his hat. He made three to four hundred dollars for his 20 or so minute show.

When we were in Florida, a street magician recognized Phil and asked if he could do some magic for him. It was something with sponge balls. He was pretty good, but the best part was that at the end of the routine he asked Phil is he wanted his watch back. Phil had no idea he had taken it.  In so many places the tourists as well as the locals enjoyed them. They never did any harm, only good, so what’s the problem with our City Hall?