Does The Magic Bug Ever Leave You?

Like a fish, once you’re hooked, it’s hard to get away.

We had a visitor from New York yesterday. He’s a comedian and he had a gig at the Monument National last night. His name is Matt Richards and he’s a natural!

He came in for flash paper. He needed it for the show and asked Ricky Bronson 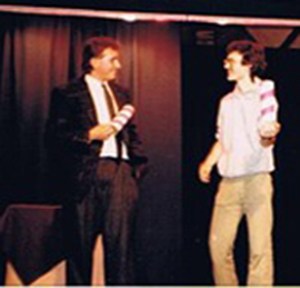 where he could get it. Ricky told him to go to Perfect Magic. Here’s a photo of Ricky at Magie Montreal. Ricky was performing Topsy Turvy Bottles and somehow managed to drag my son Michael up on stage as his volunteer.

Matt used to do magic but now he  does comedy. He’s doesn’t do magic any more, he said. I wanted to tell him the two were not mutually exclusive but I didn’t have to. By the time he left he was back into magic.

Guy Camirand happened to come in while he was here and we had a great time. In magic you get to meet the nicest people. Did you ever leave magic and come back? If so, what brought you back?