Look Who Came Knocking on Our Magic Door!

As you may or may not know, Perfect Magic has been around for more than 40 years. We started having Magic Evenings on Thursday nights in our home before that to see if there would be an interest. There was.

Morrissey, Chandu and Cramer’s were the other magic shops at the time. Le Grand Marcis was giving magic lessons. He had a magic school.

Someone, who has been our customer over the years was 18 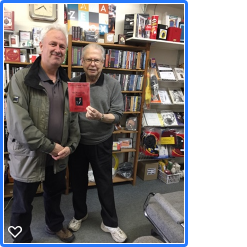 when he came to our home back in the 70’s for those magic evenings. But he has been ordering on line. Last week he came in. I didn’t recognize him at first, and I’m sure he wouldn’t have recognized us except when people come into the shop, they know who we are so he had a clue, but we didn’t.

It was Daniel Ouiment, known as “Daniel Le Bateleur”. He and Phil have a history as they were both involved with Supercool in the beautiful little theatre in Place Bonaventure where Supercool (the late Dave M.) put on magic shows.

Later on Daniel  joined the Cirque de Soleil as a juggler. Phil tells me he did unbelievable stuff with the Devil Sticks but Daniel said he didn’t do the Devil Sticks for the Cirque, only juggling.  Any how, there was a lot to talk about. Lots of good memories. Thanks for dropping in, Daniel.