Do you remember when you were a kid and saw a good magic trick? Something lit up inside of you. Wonder, curiosity, awe, and bewilderment. You saw it. It happened. But  how? Its impossible. Then one day you got a magic set, perhaps for Christmas or a birthday. Some of the secrets were revealed to you, and now you could create that feeling of wonder in others. How powerful is that?

Somewhere along the way you got busy with other things. School, music, whatever. Then you might have been surfing TV and saw Penn and Teller’s Fool Us or America’s Got Talent and that little spark that lit you up all those years ago rekindled. “Hey, I used to do stuff like that? How come I stopped?”

That’s the story of someone that came in the other day to buy magic. He had bought some on line and in Walmart and finally decided it was time to go to a real magic shop. He was delighted to find out that he came in during our 40th Anniversary Sale and would be getting a 20% discount, 10% automatically, another 5% because we had whatever he was buying in stock and another 5% because he came in person. He had started as a young kid and then felt compelled to go back to it. He handled a deck of cards well and felt the difference between a regular Bicycle Deck and the Gold Standard.

The magic flame may have dimmed over the years, smouldering just under the surface, waiting for the right time to come forth and when it does, watch out. The message here is don’t get rid of your magic even if you lose interest from time to time. You never know when that flame will flare up again. It  ofter happens to people who become uncles or grandparents. Has it happened to you?

Another message. Get a child you love a magic trick or kit and light the flame. He or she will never forget you. 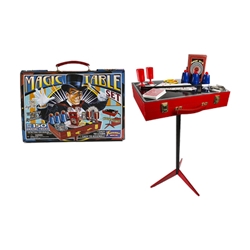 While on the subject we received a new kit with a table. Check it out.