The Show Must Go On!

So last night was the first Tuesday of the month and Phil had his show for the Eleanor London Library at Rembrandt Park in Cote St Luc. What could go wrong except the weather? Well the weather was just fine, thank you! They have a wonderful piano in the park that was inaugurated last year by none other than Oliver Jones. 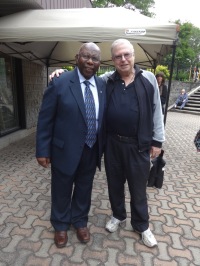 It was a big event with the media and all the big shots from Cote St Luc, including the Mayor who is now our Member of Parliament.

We got a call from the library about 5 o’clock  on Monday that they had terrible news. It seems there was a terrible wind and storm the previous evening, and although the piano is locked and protected by a heavy tarpaulin, the piano is finished. We could not believe it. We went over to check it out. The person in charge removed the tarpaulin and unlocked the piano. We tried to play it and the keys would not budge. Not one bit. It was as though the keys were all glued together in a block. There was no water damage on the piano. we opened the top. When you moved the hammers to hit the strings it worked, they seemed fine, but the keys were locked in place.

Phil said he had a piano they could borrow and we live just across from the park. Two people from the library came  the next day to help carry the piano to the park. This is the kicker. When you walk into our condo, the first thing you see is a beautiful black grand piano. Phil smiled and said, “How are you going to manage that?” Mouths dropped. Then he showed them his electric piano. Between the three of them they got the piano, the stand, the piano bench, speaker, mic , wires and all that jazz! We can’t say enough about the Library staff except that they are exceptional people and a joy to work with. They were as concerned as we were and probably more. Kudos to Eleanor London Library and all those who made this possible. It’s because of them that the show went on as scheduled and was enjoyed by all. There’s no business like show business! Let’s see what’s in store for the next show, the first Tuesday of July.